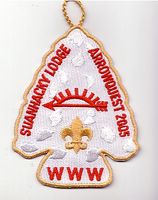 I have updated my blog roll on the sidebar to include my checklist of Shu Shu Gah Lodge #24 Chapter issues . Let me know if you have any of my needs and perhaps we can work out a deal. If you have what you believe is an unlisted #24 Chapter issue I would appreciate a scan or link to an image (and the oppurtunity to acquire one if possible) Shu Shu Gah Lodge Chapter Issues

Do you have any information on other NY OA Lodges plans for the 2005 Jambo?

I recently picked up what I thought was a duplicate 409 N1 neckerchief. Comparing it to the one in my collection I found one had brown lettering and the other black lettering. Preliminary BB Identification N1 (Brown) and N1.5 (Black Lettering) . I'm interested in acquiring a mint N1 to ensure that this is not a color variation although unlikely from washing. 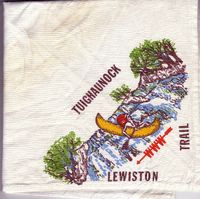 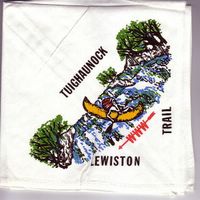 Loon Lodge has issued its first 2-piece set for its Lodge contingent to the 2005 National Jamboree. 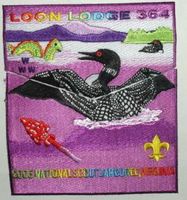