FYI...I don't normally cover JSPs, but wanted to avoid any comfusion. Rip Van Winkle Council issued 3 JSP's for the 2005 Jambo. For those interested, I understand that there are 3 diiferent border colors. While they are flap shaped, they are not Lodge issues. So won't be listed in the next Blue Book. 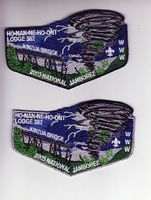 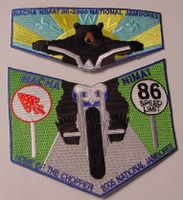 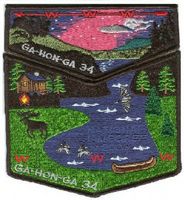 Jonathan Groves sends along information on apreviously uncataloged 412 chapter event patch. 412 Matinecock Chapter eR1990 He also writes: "FWIW, there must be a number of these undiscovered for other years. The now defunct Matinecock Chapter website stated that the Chapter was re-named in 1984 (after its creation in 1982 [name not given]), and the chapter hosted the Klondike for the "past 11 years" [circa 1997]. It also had a list of past chapter chiefs - none of which is documented on the current Lodge 412 site, or Bill Cotter's excellent resource." I'd be interested in trading for this issue and any other 'uncataloged' chapter or event issues from 412. BB Stats: Matinecock eR1990 RED R LBL YEL YEL FDL, Klondike WWW BRN 1990 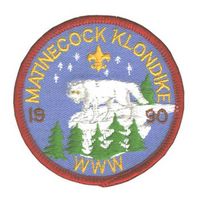 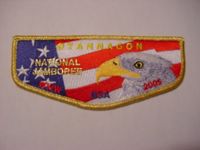