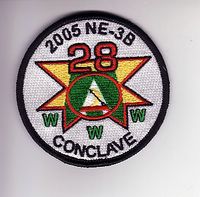 Also on its Ordeal this path month, Suanhacky issued a new version of its Elangomat patch. The previos two versions (R3 and R9) were rounds. This one is oval shaped and is likely to be designated the X30. X30 RED R M/C RED BRN FDL Oval RED WWW Elangomat

On its Ordeal last month Suanhacky issued a new flap which was presented by the advisor for service to the lodge. BB Stats: S50 GMY R M/C YEL M/C FDL Design of S40 - Advisors Award

In an earlier post on June 6, I noted "According to Scott Bracken, Tkaen Dod will be issuing 3 two-piece sets for the 2005 Jamboree. The Red Mylar border will be the fund raiser (pictured below). There will also be a trader and a delegate set." The flap from the trader set is pictured below. The X issue is common to all 3 sets.

Lodge #172 Otahnagon has issued the first of two 2005 Jambo Flaps. This is the fundraiser, a trader flap will be issued with the same design and a different border color. Likely BB issue S18

172S18 Thanks to George Jennings for the scan. 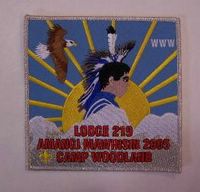 Suanhacky Lodge has issued a chenille to members of its 75th Anniversary Committee who "gave exceptional service to the anniversary effort." 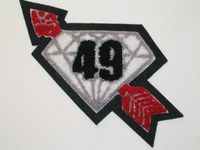 49C7 Thanks to Eddy Peterson who has provided much of the information on the recent 75th Anniversary issues from Lodge 49.

I don't think I've reported this one before, but there are two variations of the 49S40. The S40a (on top) was the first with darker yellow lettering and orange sky. The S40b has pale lellow lettering and while not mylar, the orange is the sky has a 'metallic' sheen to it (that does not show well in the scan). 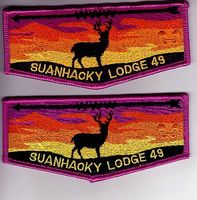 Kayanernh-kowa Lodge #219 has issued a 2005 Jambo Flap pictured below. Because I am only working from an image, I am unsure of the border color so BB stats will be updated at a later time.

As part of their 75th Anniversary Clebration, Suanhacky has created a small diamond shaped, spirit award. This is an earned award for lodge members based on their participation in the lodge during the anniversary year. BB style Stats: X29 SMY C WHT - - Diamond pierced by arrow BLK 49; 75th Anniversary Spirit Award 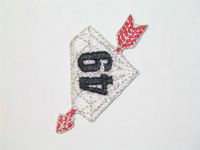 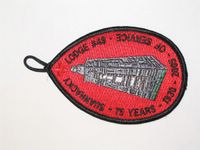 Suanhacky Lodge has issued a chevron style patch for its members who are attending the 2005 National Jamboree even though the patch contains no mention of the event. The design is identical to the X26 issued for their 75th Anniversary with the exception of a border color change from Black to Yellow as pictured below. 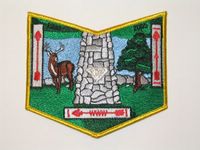 49X27 Update 06-13-05 from Eddy Peterson of Sunhacky Lodge "The chevron is meant to be paired with the 75th Anniversary Flap (S43)to complete the set. I believe that this patch came about as an error by the manufacturer and the lodge decided to give them to the Jambo contingent members, hence there is no mention of the Jambo on the chevron"

Suanhacky Lodge has issued a Pie-shaped patch both on and off the neckerchief commemorating its 75th Anniversary. The Blu Book designation should be the P3. 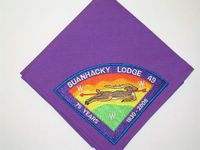 According to Scott Bracken, Tkaen Dod will be issuing 3 two-piece sets for the 2005 Jamboree. The Red Mylar border will be the fund raiser (pictured below). There will also be a trader and a delegate set. 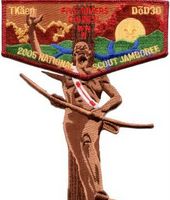 David Fritts writes, "The Haudenosaunee Lodge 19 2005 National Jamboree 2 piece patch sets have just come in. The patch is a mixture of our previous lodge flaps. The first section is our night flap, the second is the day flap, and the third is our current sunset patch. Inclosed is a scan of the patch." I undertand that some of the sets will be signed and numbered by the designer on the reverse, but will otherwise be no different from the "regular" issue. This set shoul be the S12/X6. 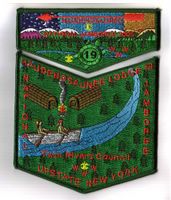 Following up on its Marvel Superheroes JSP set from the 2001 Jambo, Theodore Roosevelt Council is again issing a number of Marvel-themed JSP's for the 2005 Jamboree. This time around, Buckskin Lodge is involved too as they have added a 2-piece set with a Super hero theme. 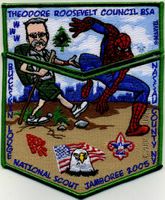