Buffalo Chip not an OA Issue

159 Ho-De-No-Sau-Nee issued first patch from NYS OA lodges for the 2005 Jamboree. The GNFC contingent thought the Buffalo Chip hanger would be a nice friendship gift/ additional trader. I have confirmed with the 159 Lodge advisor that this was not sanctioned (before or after) by the lodge. While it is an official GNFC contingent item, it is not an OA item. Since it has been widely listed on eBay as an OA item. We plan to,list it in the Blue Book as a Y issue with a "Not an OA item" note in the desription. Likely stats: YX1 BRN C BRN - - Dangle 45mmX38mm NOT AN OA ISSUE. GNFC contingent piece for 2005 Jamboree 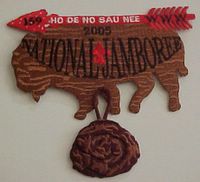