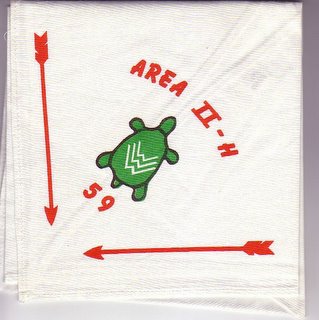 As you can see, the neckerchief is white with 2 red arrows, a red Area II-H and 59. I need to confirm my belief this is a Lodge Contingent piece to the Area 2H Conclave in 1959 and not the conclave neckerchief. Does anyone have any direct knowledge of this issue? Does anyone have a scan of the 2-H conclave patch or neckerchief? Knowledge of the Host Lodge who held the 1959 2H conclave or Camp the event was held in? Please send you comments to me via the email link in the sidebar or directly here on the blog.